What Midlothian, TX, Residents Need to Know About Wind Speeds and Storm Damage 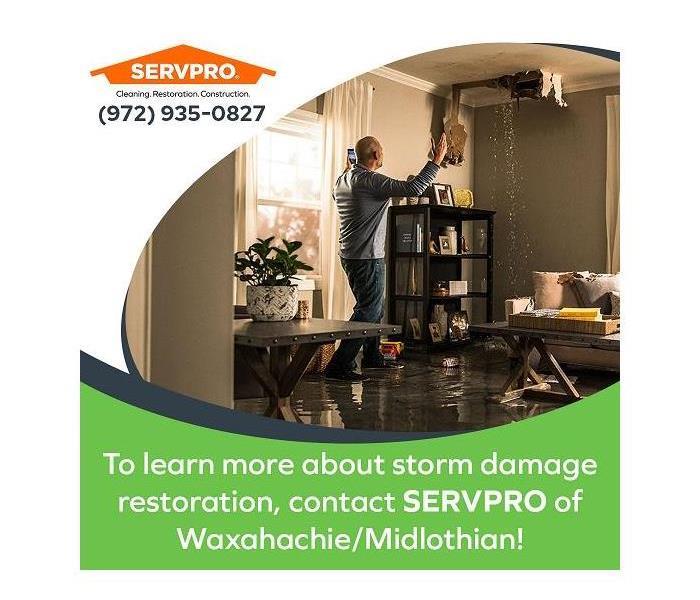 Blog Summary: SERVPRO of Waxahachie/Midlothian highlights the power of high winds to cause serious storm damage in the Waxahachie and Midlothian, TX communities.

SERVPRO® of Waxahachie/Midlothian highlights the power of high winds to cause serious storm damage in Midlothian, TX, and surrounding communities. Storm damage may be caused by many different factors. Excessive rain is generally thought of as the most common cause of storm damage. The rain may be heavy for a short period of time, and a stalled thunderstorm can spill as much precipitation on an area as a tropical storm or hurricane. Flash flooding can be devastating, especially in areas that are not covered by the FEMA flood insurance program.

Lightning may cause a house fire after a direct strike. One bolt of lightning can take out an entire power grid, putting tens of thousands of people in the dark without water, electricity, or air conditioning.

Wind can also cause severe storm damage. In fact, high winds can damage the roof, gutters, siding, and glass windows and doors of a structure, exposing the home to severe water damage. A brief blast of wind can roll up shingles, underlayment, and OSB board like a piece of carpet. The roof repair might only cost a few thousand dollars, but the water damage could cost tens of thousands of dollars to repair. By fully understanding the power of the wind to cause storm damage, the homeowner will be better able to adequately prepare for, respond to, and recover from a wind-related storm damage disaster.

When the wind threat is high to extreme, windspeeds reach or exceed 90 to 110 mph. At these speeds, the wind poses an extreme danger to life and property. Gusts over 110 mph are catastrophic. Well-constructed homes suffer severe damage to the roof and walls. These winds peel away the roof, exposing the home to severe flooding, and some homes could be a total loss after sustaining this level of damage.

Factories and warehouses will sustain roof and wall damage. Water damage to equipment, inventory, and electronics could be extensive. High-rise buildings sway. Windows are shattered, and airborne debris becomes destructive missiles that increase the damage. Personal injury and loss of life are inevitable for anyone caught in this storm. The infrastructure is crippled. Power, water, phones, and natural gas are disrupted. Trees will lose limbs or be uprooted. Damage to crops and livestock is severe.

According to a local news source, “The strongest winds in D-FW’s history are typically associated with storms. According to the National Weather Service, the highest wind gust on record for Dallas County is 115 mph at Addison Airport on June 12, 1996.”

Windspeeds have been clocked at 115 mph in the North Dallas area. High winds pose an existential threat to life, limb, and property and should be taken seriously.

Windspeeds of 60mph to 90mph are more frequent than the higher windspeeds mentioned above. The damage effects of these strong winds are serious. A tropical storm or fading hurricane may produce these wind forces. Homes will suffer roof failure, wall damage, and broken windowpanes. The winds are strong enough to down powerlines and break some power poles. Estimates to replace a broken power pole range from 8 to 18 man-hours.

Well-constructed homes will incur some damage to shingles, siding, gutters, and windows. A storm with wind speeds of 60 to 90 mph will damage many homes with roof damage that is severe enough to allow for major water intrusions if the rainfall is heavy. Do not be lulled into a sense of security when the weather report calls for moderately high winds. If conditions are right, a total roof failure could occur.

This wind threat level includes windspeeds from 39-60 mph. These wind speeds are not uncommon, but the homeowner should not ignore them. Some measure of damage is likely, though it will be limited in severity. A few homes may sustain minor damage to roof shingles and siding. Some water intrusion may occur in the attack. If rain persists, the water damage could be extensive. Isolated power outages, some down trees, and a few downed power lines may need some attention. Unsecured items on the lawn, such as garbage cans, swings, lawn furniture, the trampoline, and the unsecured grill, may succumb to the winds. Some diseased trees or tree limbs may break and fall onto the roof. A six-inch limb impacting the roof after a 10-foot fall can cause severe damage at the point of impact. The damaged roof can allow hundreds of gallons of water to flow into the home until the limb or tree is removed, and the roof is tarped.

When storm damage occurs, trust SERVPRO of Waxahachie/Midlothian to clean up the mess and restore the damaged areas. The team of restoration experts specializes in residential, commercial, and large-scale disaster cleanup and restoration and is available 24/7, 365 days a year, including on holidays.

To learn more about storm damage restoration, contact SERVPRO of Waxahachie/Midlothian by phone at (972) 935-0827 or email at acarey@SERVPRO10932.com.